GOAL’s activities involve meetings, workshops and seminars that promote exchange between specialists, transfer of knowledge as well as co-operations. Upcoming events are found on our Events page. Some of our past activities have involved:

This meeting was held in Lima on July 5–7, 2002, under the theme “Geo-Resources and Environment” (Georecursos y medio ambiente-GREMIO). It took place in the facilities of the Department of Mining Engineering and Geology at Pontificia Universidad Católica del Perú (PUCP) and was attended by over 30 Latin American alumni and 7 German participants. Much support and expertise came from representatives of the Sección de Ingenería de Minas of PUCP. This meeting was meaningful not only for the professional GREMIO event itself, but also because it launched the new network GOAL.

On April 2, 2003, the GOAL National Coordinators met the German GOAL representatives at the Geological Institute of TU Bergakademie Freiberg in Saxony, Germany. The meeting preceded the scientific program of the 18th Latin American Colloquium of Geosciences (LAK18) in Freiberg. During the one-day GOAL meeting, the main topics discussed included an updated report on the status of GOAL, past and future activities, the set-up of a member database in cooperation with DAAD, the organization of courses of continued professional education, the presentation of GOAL in scientific meetings and industry fairs and its cooperation with the mining industry.

A joint symposium with the German Federation of Engineering Industries (Verband Deutscher Maschinen und Anlagenbauer-VDMA) and GOAL took place within the framework of an exhibition for the small-scale mining industry “EXPOMIN” (Exposición para pequeña minería), in Santiago de Chile on April 22, 2004. The symposium’s central theme, “Development of the mining market in Latin America”, allowed GOAL participant members to analyse the role of our network in industry in general and in the mining industry in particular. Two important topics were discussed: the future of mining in South America and the contributions from mining activity to the sustainable development of mineral-rich countries in Latin America. 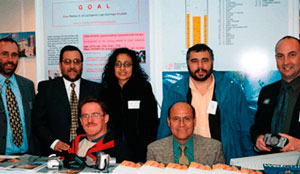 During the Santiago meeting, members were informed about the future international GOAL event “Cities on Volcanoes” to be held in late January 2006 in Quito, Ecuador.

As part of the program of the international event “Cities on Volcanoes“, GOAL organized and carried out the outstanding workshop “Recognition of Volcanic Sequences“ in Quito from January 30 to February 3 with 38 participants, mostly GOAL members.

An international training course on “Volcanology of the Central Andes” has been held for several years at the University of Salta, Argentina. This time, the course was held in Ecuador jointly by specialists from the Geophysical Institute of the Escuela Politécnica Nacional, Ecuador, the Centre of Volcanic Textures of the Geological Institute of the Technical University Bergakademie Freiberg, Germany, and the National University of Salta, Argentina, who contributed with their knowledge about the volcanology of the different volcanic zones of the Andes. 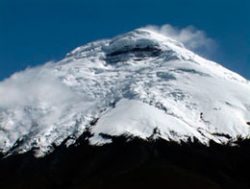 One of the main goals of the workshop was the recognition of volcanic textures in outcrop and thin sections and the interpretation of volcanic sequences as one of the most substantial conditions for volcanic risk assessment. The workshop was structured in classes dedicated to theoretical aspects and labs, including microscopy. The importance of field evidence was emphasized through an interesting fieldtrip to the Cotopaxi volcano area. In addition to funds provided by the DAAD, the workshop received a generous financial support from the Earth Science Division of UNESCO.

A special session was devoted to a presentation by Latin American GOAL participants, in which the contributions focused on the temperature of potential geothermal fields, porosity, and permeability of geothermal fields. The course involved fieldwork at two geothermal plants, visits to the Reichstag (history and energy technology) and to the Ethnological Museum of Berlin-Dahlem (Hispanic Section), and an excursion to the western Mecklenburg-Vorpommern region. An internal GOAL meeting was held to analyze its present status, achievements, and future activities.

This workshop in Costa Rica was the thematic continuation of the previous year’s workshop on Geothermal Technologies and Hydrothermal Systems, which had been held in Berlin-Schwanenwerder-Kiel (Germany). Both events are of special significance because experiences on the use of geothermal techniques on two continents could be shared, providing a valuable exchange of geoscientific knowledge between the GOAL Network members.
The Costa Rican workshop was framed within the celebration of the International Year of Planet Earth with its central message “Geology, human development in harmony with the Planet”. The GOAL workshop followed the IX Central American Geological Congress and VI National Geological Congress.
Thirty members of GOAL participated in the program developed in San José and Guanacaste that focused on geothermal energy as an alternative, viable and environmentally friendly technology. Around this main theme, other issues were studied such as geothermal exploration techniques and geochemically aggressive solutions once the field is in full production. Collateral to these main subjects, presentations dealt with hydrothermal alteration and residual volcanic activity, geotourism in volcanic environments, and the criteria for recognizing explosive and effusive volcanic sequences.
In addition to theoretical aspects, the workshop was complemented by significant fieldwork. Volcanic outcrops and two geothermal fields were visited—one in production at the Miravalles Volcano and one in exploration in the areas of Borinquen, Las Pailas, and Nuevo Mundo.
At the internal GOAL meeting, the next workshop was proposed for 2009 under the theme “Sustainable mining and environmental impact”, to be held in Göttingen, Germany.

This two-part event involved the workshop based at the Technical University of Freiberg and the 21st Latin American Colloquium on Earth Sciences (LAK 2009) at the University of Göttingen. The workshop began with interesting talks by German experts, related to the geology and environmental aspects of mining in Germany, and continued with presentations by 23 GOAL member participants on topics related to sustainable mining, providing several examples from Latin American countries. The talks were complemented by field trips to uranium mining sites near Ronnenburg, a lignite open-pit mining and recultivation site near Leipzig, as well as to locations representing ancient mining, smelting and environmental aspects in the region southeast of the Harz Mountains.

During the GOAL internal meeting, held at the Geoscience Center in Göttingen, aspects of the Geo-Network’s consolidation were discussed, in addition to defining both the country and the theme of the following seminar in 2010. Brazil was chosen to develop the second segment of “Sustainable Mining and Environment — a German–Latin American perspective”, taking into account its experience in this matter. For the subsequent workshop to be carried out in Germany, the general theme was outlined to focus on risk management, which would fit into the subject proposed by the 22nd Latin American Colloquium on Earth Sciences (LAK 2011).

Twenty-eight DAAD alumni from 13 Latin-American countries, four from Germany, plus 48 additional Brazilian participants followed the invitation to further improve and collaborate in their quest to develop sustainable mining. The continent, being one of the key areas worldwide for mineral resource exploration and exploitation, has a major interest in avoiding future trouble by environmental pollution while maintaining economic wellbeing and social stability.

Prior to the workshop, the GOAL organizers invited interested participants to two 2-day short-courses on “Geochemical mapping for sustainability” (Jörg Matschullat, TU Bergakademie Freiberg, Germany), and “Vulcanic and seismic hazards” (Guillermo Alvarado Induni, University of Costa Rica, San Jose). Both courses were evaluated very positively by the participants, who were mostly advanced students and professionals from various companies and institutions.

The event ended in a memorable excursion to various mining sites and geological setting of Minas Gerais state, touching technical and environmental issues with quite some detail. The event ended with the internal GOAL members’ meeting.

2011 As proposed at the last workshop held in Germany (Freiberg, 2009), this event in Heidelberg was oriented towards geo-hazard management. With the participation of 26 GOAL members from 14 countries, the workshop focused on earthquakes, landslides and associated inundations, subrosion, volcanic eruptions and lahars, regional perspectives on climatic change, extreme weather conditions, and water contamination. GOAL members were actively involved in the 22nd Latin American Colloquium on Earth Sciences (LAK 2011), which also took place in the University of Heidelberg.

Two interesting field excursions were carried out to complement the oral presentations: one in the Upper Rhine Valley that centered on rock slides and neotectonics, and the second one in the East Eifel volcanic field and the Cologne Lowland that focussed on volcanic hazards and paleoseismicity.

The internal meeting raised issues about the future of the Network in terms of its growth and strength, as well as the topics on which the following meetings would focus on. Workshop themes on geoparks, geotourism, and geological-mining heritage were proposed.

10. Geosciences and Society — Bridging the gap with GeoParks and Co (Heidelberg, Germany) 2014

The GOAL Workshop 2014 was held in conjunction with the 23rd Latin American Colloquium on Earth Sciences (LAK 2014) at the Institute of Earth Sciences, Rupprecht-Karls-University Heidelberg. The Workshop included about 40 presentations with intensive discussions, short excursions to the old copper mine in Schriesheim, and longer excursions to the geoparks in Odenwald, Schwäbische Alb and the impact crater Nördlinger Ries with the Ries Museum. The final highlight was the visit to the UNESCO World Heritage site, Grube Messel.

Over the last years, several times by Latin American countries applied in vain for a geo-park (UNESCO-based category). From the total of currently 100 successful geopark projects worldwide, there are only two in Latin America (one each in Brazil and Uruguay). For this reason, the workshop and excursion aimed to build knowledge and exchange experience on Geoparks. The excursion to visit successful German geopark projects near the event location enabled participants to directly talk to and discuss with responsible colleagues on site. This approach could fully be realized and must certainly be seen as highly successful. It was important and very good for the GOAL network to see that the long-term Regional GOAL coordinator for Latin America, Prof. Reinaldo Garcia (Columbia and Canada) was willing to shoulder this task for another period and was re-elected univocally.

As part of the celebration for the 100th anniversary of the Colombian Geological Survey, the GOAL Workshop 2016 “Sustainable Development of Georesources: Achievements & Challenges” was held in Bogotá, Colombia, from September 26 to 30, 2016. The event was organized jointly with the Colombian Geological Survey and the support of the National University of Colombia and the Colombian Geological Society. Thirty DAAD alumni from 11 Latin American countries (Argentina, Bolivia, Brasil, Chile, Costa Rica, Cuba, Ecuador, México, Paraguay, Perú and Uruguay) and three from Germany attended the workshop to share their experiences from research projects carried out in each country.

The meeting involved two segments: the academic/scientific sessions and the field trip. In the initial part there were 38 talks presented at the scientific sessions that were also attended by students from different universities with geoscience programs. This allowed GOAL to show how it effectively works as an international platform for the dissemination of knowledge. The sessions included talks that were given by the DAAD Representative in Colombia and by a professor at the Goethe Institute in Colombia, which highlighted the promotion of learning the German language. A field trip was made to the Villa de Leyva area, located in the Boyacá-Province, about 4 hours from Bogotá. Due to its unique geological characteristics and history, this area is an interesting place for geologists and geology students. The workshop concluded with the internal meeting of the GOAL members in order to share ideas about how to promote and strengthen the network.

12. The role of Geosciences to societal development: a German-Latin American perspective (Monterrey, México) 2017